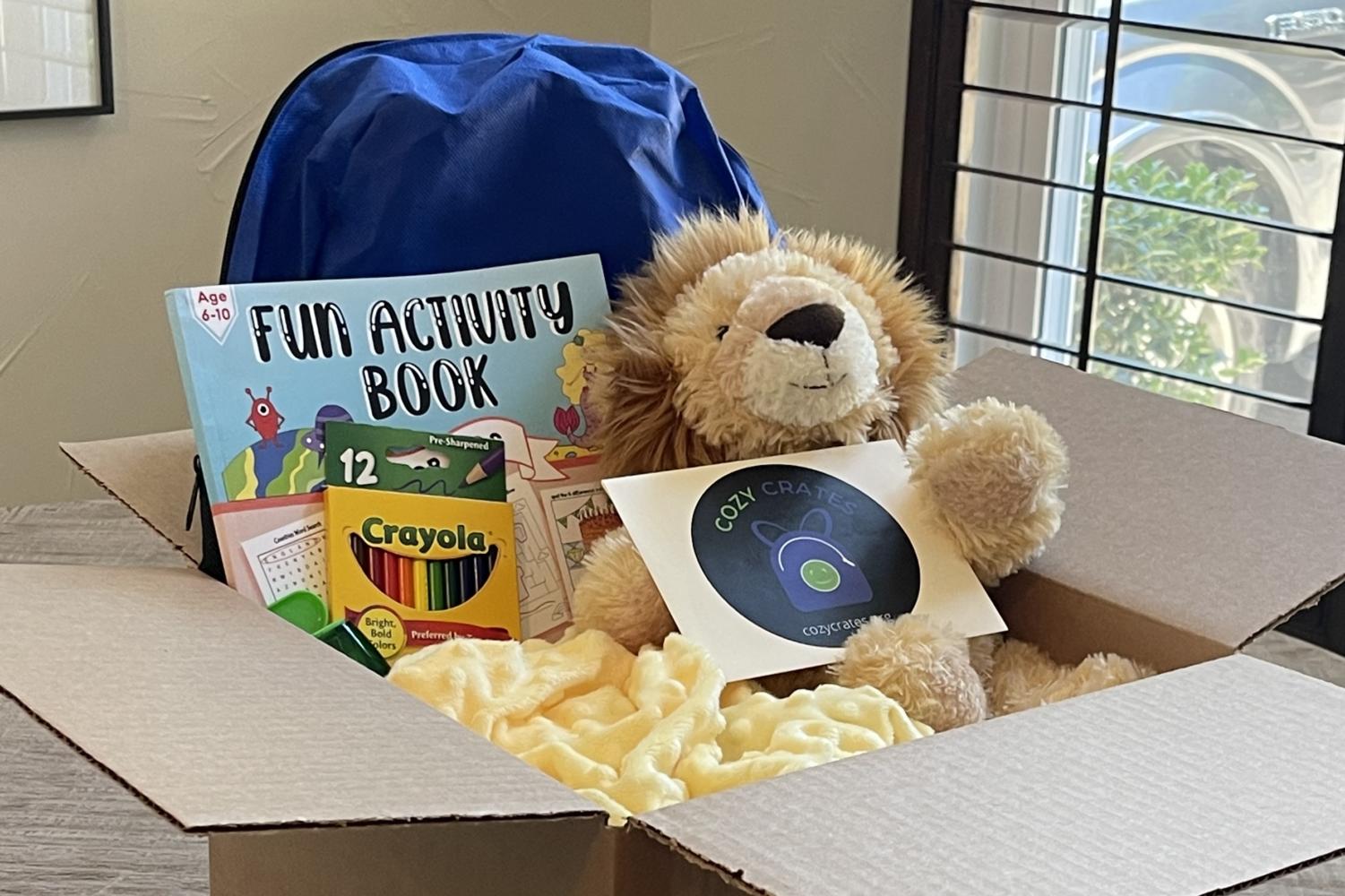 A Cozy Crates box is shown packed full. The lion stuffed animal, which will be given to a child in need, is holding a card with words of encouragement on it. (Photo by Lily Falconer)

A Cozy Crates box is shown packed full. The lion stuffed animal, which will be given to a child in need, is holding a card with words of encouragement on it.

From ruin to relief

Complete ruin, utter shock and no way of knowing what would come next – that is what junior Lily Falconer experienced after enduring the relentless nature of two Category 5 hurricanes on the island of St. Croix in the late summer of 2017.

In her time reflecting on the emotional toll these disasters had on her life, she decided she wanted to do something she hopes will give other people a sense of comfort and support following one of the worst moments of their lives.

“[The hurricanes were] terrifying,” Lily said. “You don’t understand how bad hurricanes [are] until you live through [one].”

The Falconer family moved to St. Croix, an island that is a part of the U.S. Virgin Islands, from Carrollton in February of 2017. Only seven months after their arrival, both Hurricane Irma and Maria struck the island, destroying everything in sight. The Falconers’ power went out for 119 days, rendering any sort of communication with the outside world inaccessible. After a week trapped inside their home by a 14-foot-tall mudslide, the Falconers got on a mercy flight to the United States and returned to Carrollton, unsure of what would come next.

“Everything looked dead,” Lily said. “There were no leaves on any trees [and] you could see into your neighbor’s backyard through the trees, something you couldn’t do before [the storm]. I didn’t know what was really going on outside until we had to drive to the airport. It felt like an apocalypse.”

Lily said that the storms took a large toll on her mental state. She wanted to find a way to make a change, some way to help others who were going through what she’d gone through. After settling back down in Texas, Lily decided she wanted to find a way to directly support other hurricane survivors in the future. During the spring of 2022, she founded a non-profit charity organization under the name “Cozy Crates” with a mission to serve and comfort as many children in need as possible with handmade care packages.

Each box contains a Cozy Crates backpack, a soft hand-tied blanket, a stuffed animal, an activity book, both normal and colored pencils and an encouraging handwritten card. With the support of the National Charity League and some of Lily’s friends and family, Cozy Crates has received overwhelming support, along with ample donations and volunteers eager to help prepare boxes.

“[Lily] has done a lot of volunteering in the past, but this is something that’s hers,” Lily’s mother and Cozy Crates co-owner Robyn Falconer said. “She genuinely wants to help other people, especially kids. She’s set a goal and has really achieved it. She sees a purpose.”

According to Lily, volunteer and close friend junior Camille Jones has been “extremely supportive” throughout the process of starting Cozy Crates. Jones has often volunteered for the organization by tying blankets together to be sent in the boxes.

“The kids that these [boxes] are going to are going through such hardship at a young age,” Jones said. “It’s just so cool to know that I get to help them.”

Jones, who has been in favor of the idea of Cozy Crates ever since the concept came up, said that she is so proud of Lily for what she is doing.

“Cozy Crates is just such an amazing organization led by great people,” Jones said. “Lily is such an inspiration [to me because of] this.”

Not only does Lily want to provide support for affected families, she strives to raise awareness of the emotional impact of natural disasters on survivors. After doing research on relief-focused organizations, she noticed they were mostly supply donations and rarely focused on mental health. The effects that hurricanes can have on victims aren’t talked about very often, Falconer said, but she expressed a desire to change that.

“Seeing [the kids] in front of you is so different than just sending the boxes down [to the coast],” Lily said. “I empathize with what they’re going through, and I want to see it through.”

After close monitoring of the recent Hurricane Ian, both Lily and her mother decided that it was safe enough to face the destruction caused by the storm. The team headed down to Fort Myers, FL on Oct. 3 to personally deliver the comfort crates to children and their families.

“It was the most beautiful experience being able to give [the kids] the boxes,” Lily said. “The kids loved them and were so excited. It was almost like Christmas morning for those few minutes.”

While they were delivering boxes through an American Red Cross center located at South Fort Myers High School, Lily and her mother had the opportunity to connect with and provide comfort to multiple families affected by the hurricane. Lily said that many of the mothers at the shelter were very appreciative of what they were doing and many of the mothers started to cry. According to Lily, one of the mothers said, “I’m just so happy to see [the kids] smile again.” The two ended up delivering boxes to four different shelters and distributing all of the 100 boxes they brought on the first day of their trip.

“Being in front of the people I was personally affecting was transforming in a way I’ll never forget,” Lily said. “I don’t feel like a victim of the storms anymore, but more of someone well-equipped to understand and help others who go through the same thing [I did].”

For information on how to support Cozy Crates and its mission, visit cozycrates.org.