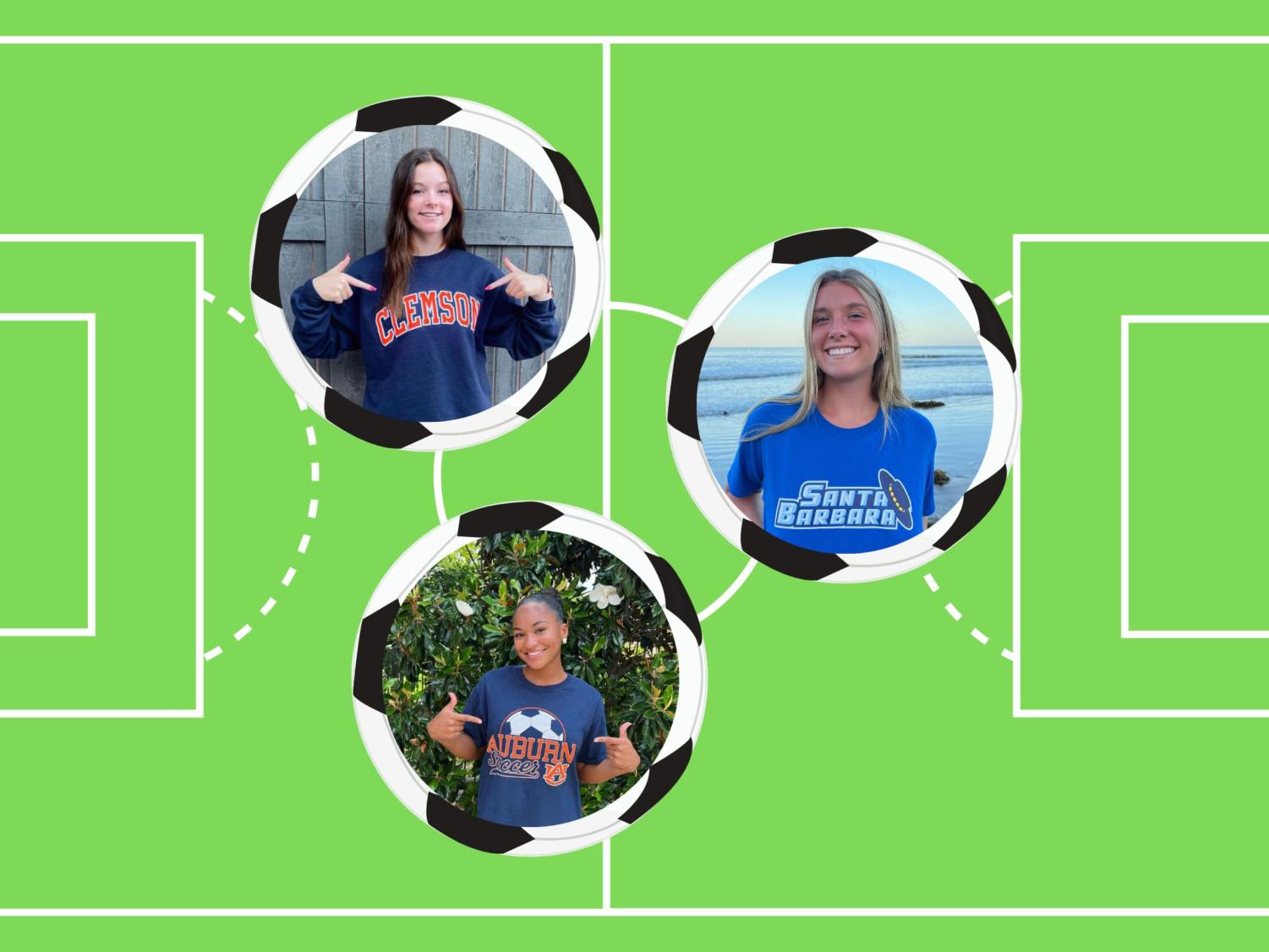 Officially signing as a D1 athlete for any sport can be a triumphant accomplishment. For varsity soccer players Eleanor Hays, Mya Williams and Olivia Howard, this moment has been long anticipated since the beginning of their soccer careers, as early as 3 years old.

Growing up, Eleanor Hays said she was an awful gymnast.

At the age of 3, Hays struggled with tumbling and cartwheels during practices. Her mother made the decision to have her quit gymnastics and begin a different, more physical sport: soccer. Upon joining her neighborhood team, Hays grew a passion for soccer and has played for 15 years, both for clubs and school teams.

“I’ve been playing soccer for 15 years, club for 10 years [and] this is my third year playing [at Hebron],” Hays said. “I love all of the [Hebron] girls. Everybody gets along so well and the energy is really fun.”

Over the years of playing, Hays made it her goal to pursue soccer in college. However, mental obstacles and self doubts along the way created a few bumps in the road as she has progressed with her athletic career.

“There was definitely a point where I thought about not doing [soccer] in college,” Hays said. “The mental aspect is really hard. If you just lost a hard game, it’s really hard to stay positive in that situation and want to keep playing. But, I think I love the sport too much to stop playing it for good.”

Upon attending a soccer camp at Clemson University in the summer of her eighth grade year, Hays grew to love the campus, the people and the coaches.

“From then on out, I knew that’s where I was going to end up,” Hays said. “When I got the opportunity to [commit], it was a no-brainer. I never would have imagined I [would] go to Clemson and play soccer, that’s something that some girls can dream of. I’m really lucky.”

As graduation is only months away, Hays already has a plan created for college. She plans to major in education with a minor in psychology, wanting to become a teacher if she does not pursue soccer professionally.

“I want to see if I can try to play professional [soccer]; that’s definitely the goal,” Hays said. “My dream would be [playing for] the Portland Thorns. That team is full of women’s national team players; [it’s] such a good program [with a] good coaching staff and history.”

Similar to Hays, Mya Williams was involved in gymnastics at 6 years old. One day, Williams asked her mother to quit being a gymnast and instead play soccer. To this day, Williams has no idea what motivated her to join soccer, but believes she made the right decision.

“I’ve always wanted to play [soccer] in college,” Williams said. “My mindset has always been [to] keep working hard until you achieve your dream of playing in college. The fact that I am now playing D1 soccer has solidified all the hard work I’ve put in throughout the years.”

After playing at Hebron for only one year, Williams feels as though she will miss the familial bond the varsity team has created once she graduates and moves to Alabama for college.

“It’s just one big family,” Williams said. “[I’ll miss] all of the team parties, going out of town for soccer and trips.”

Numerous commitment offers began appearing for Williams, and she kept note of what she wanted for both her personal and athletic future – even if it meant sacrificing the chance to play with a friend, former varsity captain Parker Coe.

“One [offer] that was local was [Dallas Baptist University] where Parker Coe goes,” Williams said. “[The decision] was very hard. I did want to play with her — she’s an awesome person — but I knew I wanted to play for an SEC school.”

Williams does not plan on playing soccer professionally, but instead wants to pursue dermatology with a major in pre-med.

“If the opportunity [to professionally play] presented itself, I would [take it],” Williams. “But currently, I think I want to major in pre-med and become a dermatologist.”

Olivia Howard began playing soccer for fun, to have something to occupy her time as a young child. To her surprise, Howard’s love for the sport increased through the years since she began playing at the age of 6. Howard appreciates the lifelong friendships that have been created through playing the sport the most.

“I moved to Hebron in my junior year, but I’ve played high school soccer since my freshman year at The Colony High School,” Williams said. “I [also] play in a club called Sting – I enjoy it a lot, and I’m with some of my friends that I’ve known for a long time. [Playing soccer has] been an enjoyable experience.”

Once the University of California at Santa Barbara offered her a spot to play on their D1 soccer team, Howard knew it was meant to be. She enjoyed the beach location and the level of education the college provides.

“I absolutely fell in love with the school,” Howard said. “It’s on the beach; living on the beach is unbeatable. Going on to play at a dream school and getting an amazing education through the sport is the most rewarding thing.”

Instead of remaining on the soccer field as a professional player, Howard plans to replace her cleats with heels and major in law, focusing on a career within business law in California.

As Howard prepares to graduate next year, she advises rising seniors to apply for colleges early and simply live in the moment, because you are only a senior once in your lifetime.

“Apply to colleges early and figure out what you want to do with your life,” Howard said. “Be in the moment. I’m almost halfway through my senior year, and it’s flown by. [Just] take in every moment before [high school is] over.”