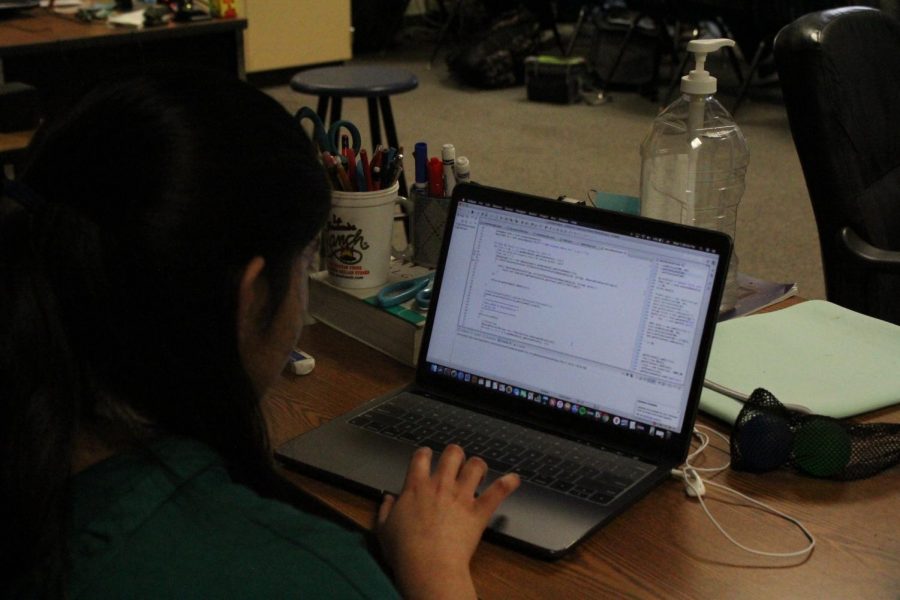 Senior Sanjana Yadav works on a code that connects the program to a database. Yadav and senior Tanya Jagan are creating a tool for the school administration.

This year, Hebron brought 17 girls to the Digital Divas computer science competition held on Feb. 2, more than any other year.

This all-girls competition is designed to promote young women to pursue a STEM related field and introduce girls to computer science by allowing them to compete in different divisions and participate in workshops.

“We won our first award at the Digital Divas earlier this month,” computer science teacher Jared Stites said. “Now we’ve grown, and this is unheard of, especially in an industry where the computer science percentage of women is 18 percent, so we’re talking one out of 10. Usually, there’s only one or two girls. We brought 17.”

Stites attributes the team’s growing numbers and success to the passion girls have developed for computer science and their hard work to excel in it.

“A lot of these girls came into computer programing as just an elective,” Stites said. “A number of them, three of them really, Sanjana Yadav, Mya Mahaley and Tanya Jagan, have really latched onto it and kind of enjoyed it. They started doing a lot more and growing and getting better at it, and then their senior year they became some of our top competitors.”

Senior Mya Mahaley is one of the many female students who have been impacted by Digital Divas and has been inspired to take her computer science skills out of the classroom.

“Digital Divas exposed me to a lot more of what computer science would feel like because prior to this year, I was very unsure of what life would be like if I pursued something in the STEM field,” Mahaley said. “It served as a source of motivation towards majoring in this field and pursuing a career. We’re using some of the knowledge that we’ve gathered throughout these competitions in order to put it into a program that can be used within Hebron.”

Outside of competitions, Mahaley, Yadav and Jagan have worked on growing their program and using the skills they’ve learned throughout the years to strengthen their knowledge and learn more about computer science.

“This is one event, but they’ve been doing a number of other things, like cyber security,” Stites said. “They’ve been great as far as recruiting and growing the program. The website – digitaldivas.rocks – they built that website. It’s amazing going from an ‘oh, this is just an elective’ to ‘oh my gosh, this is what I’m going to do with my life’ and getting good and getting to the point where they’re actually doing things like building the infrastructure, winning awards, and building software for the school right now.”

Digital Divas is, according to Mahaley, a source of comfort and a safe haven for many young girls pursuing computer science.

“I definitely think Digital Divas has changed me just because it made me feel like I wasn’t alone in this,” Mahaley said. “I’ve had other girls in the club to resonate with and share our struggles of having to deal with all boys when going to competitions. When you’re in an environment surrounded by all girls doing the same thing as you, it serves as a source of comfort and motivation and hope for your future.”