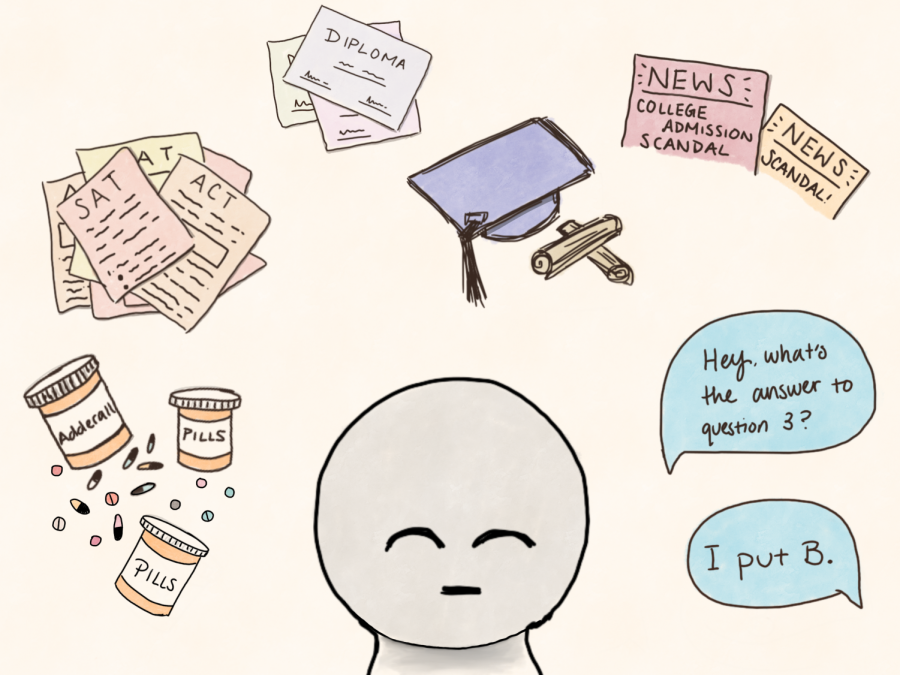 Staff Editorial: Too much independence leads to deceitful generation to be formed

Although a common occurrence, college admissions scandals have received more publicity in the past few months due to its celebrity connections. This issue has brought up the question on who is actually to blame for this scandal: the adults or the kids. But rather than pointing fingers at individuals, the blame resides in the values we are brought up with. Because we are conditioned to care so much about independence, it allows for a selfish and deceiving generation to develop.

From elementary school and up, we are conditioned to think going to college is the gateway to success; it’s the norm. This leads to high-achieving students in high school being drawn to  schools because of their prestige. Rather than focusing on securing a better future for themselves, students focus so much on what the community will think of them if they go to a certain college. This is another factor in the college scandals — the celebrity parents feel the obligation to cheat their way into prestigious colleges just to maintain their reputation.

Overly competitive schools create an environment in which students feel compelled to cheat in order to survive. On top of creating selfish students — who do anything to get to the top — excessive competition also brings forth the mentality that unhealthy habits come with success. From cheating to substance abuse, students have been caught doing many unhealthy things in order to raise their grades or ranks. According to the National Center for Health Research, in many high schools and colleges, there has been an increase in Adderall, AKA “the study drug.” The medication is for people with Attention Deficit Hyperactivity Disorder (ADHD), but students illegally use it in order to focus, stay awake and study. This type of abuse of the system can lead to a corrupt future, like the college admissions scandals have shown.

A problematic aspect of society also comes forth due to these scandals: money can and will be used for anything. Money allows wealthy people to achieve “great things” because they are able to buy their way through it all. But unlike the students who bought their way into college, many lower-income students have big dreams of earning a college degree to get their families out of their low-living standards. On top of buying a way in, parents have hired SAT and ACT test takers to replace their children on the day of the test and faked sports achievements for them to get “recruited.” Because authorities turn a blind eye toward issues such as this, many well deserving candidates do not get their spot in colleges. Taking away the chance of a spot in college from these students is unfair.

Rather than promoting a competitive environment and excessive independence, schools should promote a cohesive community in which students work together in order to get through school. Students in some smaller countries build friendships that allow them to grow together, and the independence that is stressed in American society is not as prominent. In addition to improving the school environment, colleges can equalize their tuition rates in order to for students to view them as equal, decreasing competition.

Overall, the college admission scandals brings forth a multitude of issues the future generation is brought up with — many of which are due to the independent society we live in.