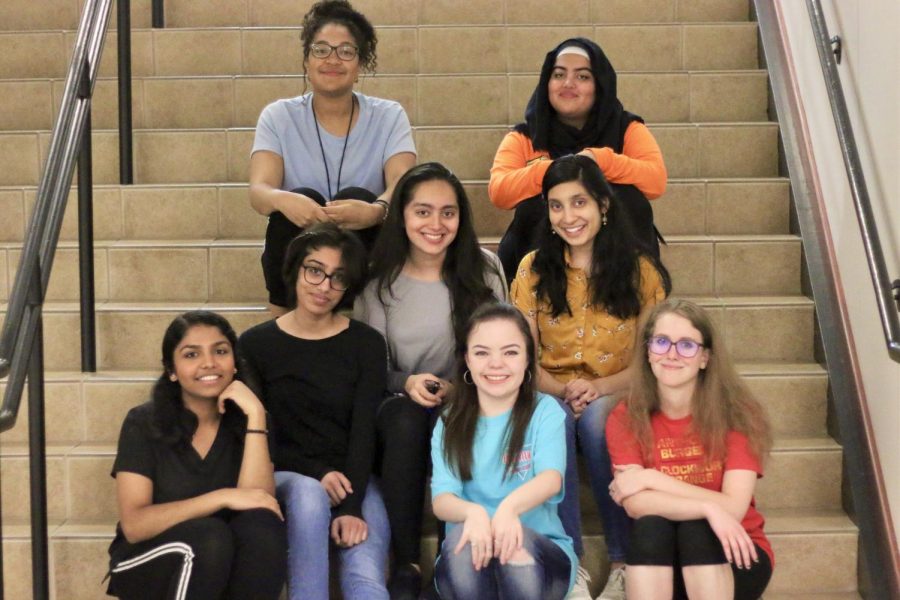 Hawk Eye seniors reflect on their time on staff

Trying to reflect on my four years in high school has been a challenge for me. I didn’t know whether to focus on the academic aspect, the friendship aspect or even my three years in newspaper. But sitting in the Hebron halls, watching past teachers walk by, I realized it all went by in a blur, but everything (lessons, “tragedies,” people, friendships, etc.) that happened in high school will be condensed into small fragmented memories I will hold onto forever.

During my time in middle school, I found myself jumping from different groups, not being able to find “my people.” But after changes throughout the years, I finally found my two groups — my best friends and my newspaper family. And after four years, I could tell you small details: the way the conversations evolved, when someone was missing from events, and sadly when people started to drift apart. And because I could tell you all this, I just don’t want to say goodbye.

I joined the newspaper staff thinking it would just be a way for me to write and share stories with people, but I never realized I was building a family as well. Walking into the classroom for the last time was a weird experience. I had to remind myself that today would be the last time I would enter this room and be “Parn.” The interactions with people (besides the last few minutes) were honestly normal — it was like coming back from a short break to the family you see almost every day. Laughing and joking around like usual, I didn’t see the time pass by until it was time for me to say bye.

It was hard to step out of that room and let go of that door handle – almost like letting go of a safety net, a place I could always go to and feel welcome in. Some of these people I know I will see in the future, for college, but as for those I won’t, goodbye; it’s been a great run and I hope we will meet up in the future for a newspaper reunion.

I have seen the changes and how they’ve affected me and the people around me, and I have accepted that change has to occur in order for us to progress in life. And yes, I’m in denial about having to leave my people, but I’m also excited to see what the future has in store.

Exactly two years ago, I was finishing my first journalism course, and from what I remember, I had an extreme amount of fun slacking off with friends in this super chill class. Needless to say, I didn’t expect to do much more with what I learned in that class later on.

However, the impending deadline of course selections and the resulting stress of selecting just one more course made me turn to my friends for help. Of course, one of my best friends and newspaper’s editor-in-chief, Yusra Waris, suggested newspaper.

I began my official journey with newspaper my second semester of junior year. I had absolutely no idea what I was doing, and I was incredibly afraid of the judgement of my writing and the possibility of not fitting into the environment. Yet, everyone took me in with open ar

ms. The seniors were welcoming, and I learned so much from these editors. When I wrote my first practice prompt, the managing editor tore it apart, yet she gave kind and justified remarks for improvement. The feature editor, who I instantly connected with, channeled my passion for feature writing. The sports editor showed how fun the class could be, and she actively made the class entertaining. The seniors and the editors created such a wonderful environment, and it allowed my writing to grow.

This year, newspaper was a time of personal growth and incredible bonds of friendship. The editors this year demanded quality of production, allowing me to produce some of my best works. As feature editor, I was able to pass down some of my knowledge to the new arrivals. Through all the learning, I was even able to go to state in UIL and win first place at a convention — something, I never thought I’d ever do. I’ve made some of my closest friends in this class, and this has been a place where I could escape the toxicity of high school. Often, the class would serve as a place of ranting, and together, as a makeshift family, we would help each other solve problems – not only newspaper related, but also life related.

Newspaper is a time in my life that I will never forget, and the people I’ve met in this class will hold a place in my heart for life.

My first memory of high school was standing outside of the journalism room my freshman year before class. I was quiet and full of nervous energy and I remember sitting in class thinking, “when is this period going to end?” Next thing I know, I’m on Hawk TV. Then I’m on the UIL journalism team. Then I’m in newspaper.

I’ve had an odd appreciation for journalism for a long time. Growing up, I’d ask my parents for magazines as Christmas or birthday gifts. Reading magazines and random online columns really formed the foundation of who I am today. Hunter S. Thompson, Joan Didion and Cat Marnell all have served as personal inspirations to me, even though I wouldn’t necessarily say they’re good influences. But surrounding myself with their work as a kid prompted me to start writing on my own. Writing grew to be a major love of mine, which really is the entire reason I decided to stick around with journalism and eventually join newspaper.

I officially began newspaper as a senior. I had no idea what I was doing; it was definitely an adjustment period for me. Newspaper was a class that was different than what I was used to. It had a family feeling and it was filled with incredibly smart and talented women, each with different personalities and reasons for being there. I initially felt out of place. I loved to write, but I didn’t think my writing or interviewing skills were sufficient enough to publish anything. Over time though, I got more comfortable with who I was as a writer and found my own style and voice.

Looking back on high school, I’ve realized that newspaper was definitely a major part of my experience and has given me some of the best memories. High school hasn’t been an easy time for me, and I’ve had a hard time navigating life and trying to figure out who I am and what I stand for. Journalism and the friendships I’ve made through it were some of the few constant things in my life that I felt like I could rely on. They’ve grounded and reminded me that life goes on, and I’ve always got people supporting me and there to help me during the tough times. Newspaper was a time of personal growth for me and it allowed me to learn so much about the diversity of the student body at Hebron as well as the world around me. It was the one class I felt understood in and I felt like my voice and opinions mattered.

Overall, I’m so happy to be done with high school. It honestly wasn’t a great time for me. I am forever thankful for my experience and time in newspaper, though, as well as the strong relationships I’ve made through it. Newspaper is a class I will not forget, and I am forever in debt to the brilliant and lovely staff and adviser, Mr. Jones, for being a light in my life and making the everyday activities at school seem a little less harsh and mundane.

I joined newspaper as an unpromising freshman: someone who said no more than five words in class, someone who stuck to safe stories and someone who lacked the qualities of a leader and quality reporter. Now, I am ending my high school journalism career as someone who speaks her mind (almost too often), someone who has written a on a wide range of topics and someone who gets to pass down the responsibility of being Editor-in-Chief to the leader of next year’s staff.

My journey from reporter to Editor-in-Chief taught and influenced me more than most people (myself included) would expect. After all, I’m just writing and reporting, right? Well, it’s more meaningful than that. Within hours and minutes, we become experts on certain subjects and familiarize ourselves with the life stories of the people we interview. Starting off with a piece arguing the importance of Valentine’s Day and now dedicating one of my last stories to a student’s fight with her past, I have found myself develop a deeper understanding of just how vast our world is and how I wish to contribute to it.

With newspaper being constant throughout my time at high school, I’ve noticed the learning curve I’ve experienced as a listener, story-teller and overall person. Through cycles worth of fact checking and extensive interviews, I’ve learned to recount significant events in the lives of my interviewees to the smallest details and perhaps, on the way, I’ve also learned to do the same with mine. I’ve recently concluded, after asking myself the right questions, that the person I am and the path I am on is not one I would want written in my story.

After years of recording major feats and struggles, I’m inspired to start a new chapter, a blank slate; one not malleable to external forces. A story in which I surround myself with people who encourage my growth rather than unsheathe the weapon of my childish past to limit it. I’m not sure how I’ll go about it, but I know this is something, in almost every aspect, crucial for me and overall self efficacy.

Though our time left together is limited to less than a few weeks, the amazing Hawk Eye staff, inspirational interviewees and “cool” adviser, Mr. Jones, will definitely continue to shape me as as I take on college and other essential milestones in my life.