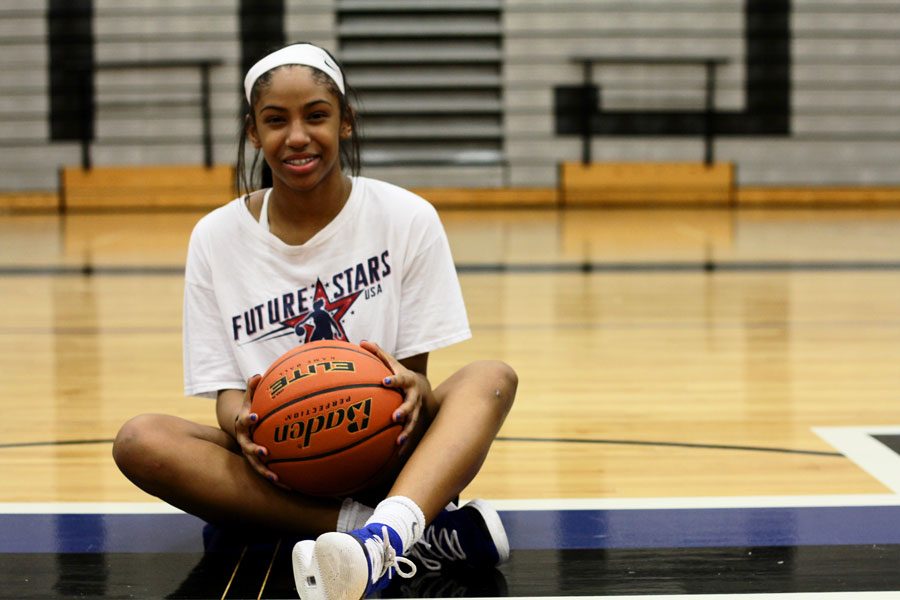 Freshman Cammie McKinney poses on the super H in the gym. McKinney is the only freshman on the varsity girls basketball team.

She was around 5 when she began playing basketball at Little League, 11 when she realized it was something she wanted to continue with, and 13 when she received her first college offer from University of North Texas.

Now 15, freshman Cammie McKinney serves as the point guard for varsity girls basketball as she continues to work toward crossing more milestones in her basketball career.

“So far it’s been a good experience,” Cammie said. “Before I got there, I knew most of the girls that were on varsity, so I was coming to a new environment, but [at] the same time I wasn’t. I didn’t have to really get to know everybody because I already knew them, so that definitely helped me with the adjustment. I would say it is definitely harder than middle school ball, but the team really welcomes me.”

This year, Cammie is one of the two new starters on the basketball team.

“That’s a huge feat,” basketball coach Chalisa Branch said. “That is pretty rare, especially in that point guard position because I think it is the toughest position: not only do you have to know what you are doing, but you have to know what everyone else is doing on the offensive end and should be the one communicating on the defensive end as well. There wasn’t a decision to be made, it was her natural position. She’s the best in the program at that position.”

When Cammie was 5, she was already involved in almost every sport except for basketball until her mother, Aarolyn McKinney, suggested to try it out.

“I think it’s only natural when a parent plays and loves a sport, they want to introduce their child to it,” Aarolyn said. “You want to share that. I have been blessed in this way. I played basketball and coached for the school I taught at while I was pregnant with Cammie. I was seven months pregnant at practice and one of my colleagues came up to me and said ‘That baby is going to come out dribbling a basketball,’ and so it was spoken. Cammie hit the basketball court at 5, smiled the entire time she was on the court, and never looked back.”

Ever since Cammie began playing basketball, she has played the point guard position on the team.

“When you are younger, positions are based off of height, and I wasn’t really tall so [the coaches decided to make me] a point guard,” Cammie said. “So I just grew up the whole time learning how to handle the ball and lead the team.”

I think we have the talent to win district and make it real far in the playoffs. It makes me feel good, and it makes me feel like I’m contributing, but it’s definitely a team effort.”

So far in this season, the Lady Hawks have a winning record of 25-2 in the district; Cammie said the team’s achievement makes her feel she has been helping with its success.

“Our being able to mix together as a group so early, I think, is really special,” Cammie said. “I think we have the talent to win district and make it real far in the playoffs. It makes me feel good, and it makes me feel like I’m contributing, but it’s definitely a team effort.”

Aarolyn said she first realized Cammie’s potential when she played in her first National Championship game in Oklahoma in 4th grade: with eight seconds left, Cammie drove the length of the court, got fouled and hit the game-winning free throw with one second left. The second time was last summer in the Jr NBA Regional Championship game when she scored 35 points for the team.

“Basketball was always easy for Cammie,” Aarolyn said. “In both games, it was her poise, mental toughness, and determination not to lose, and I said to myself, both times, I think she’s got it. Her skillset has always been higher without much effort. So, a lot [of] her growth has come in how she now understands the mental preparation and the commitment it takes to train and get better. Of course, as she continues to play, her basketball IQ continues to get better and she is also evolving into a more vocal leader.”

Cammie said growing up playing basketball has helped her communication skills grow and change her as a person. Her experience playing in sixth grade, when her team was down by 12 with three minutes in a game and ended up winning last-minute, reaffirmed her belief that anything is possible with teamwork.

“You have to realize you are on a team and in order to get your work or your job done, you have to be able to cooperate with them,” Cammie said. “It has definitely taught me to be patient and that everything happens for a reason. All your wins, all your losses, it’s all for a bigger purpose.”