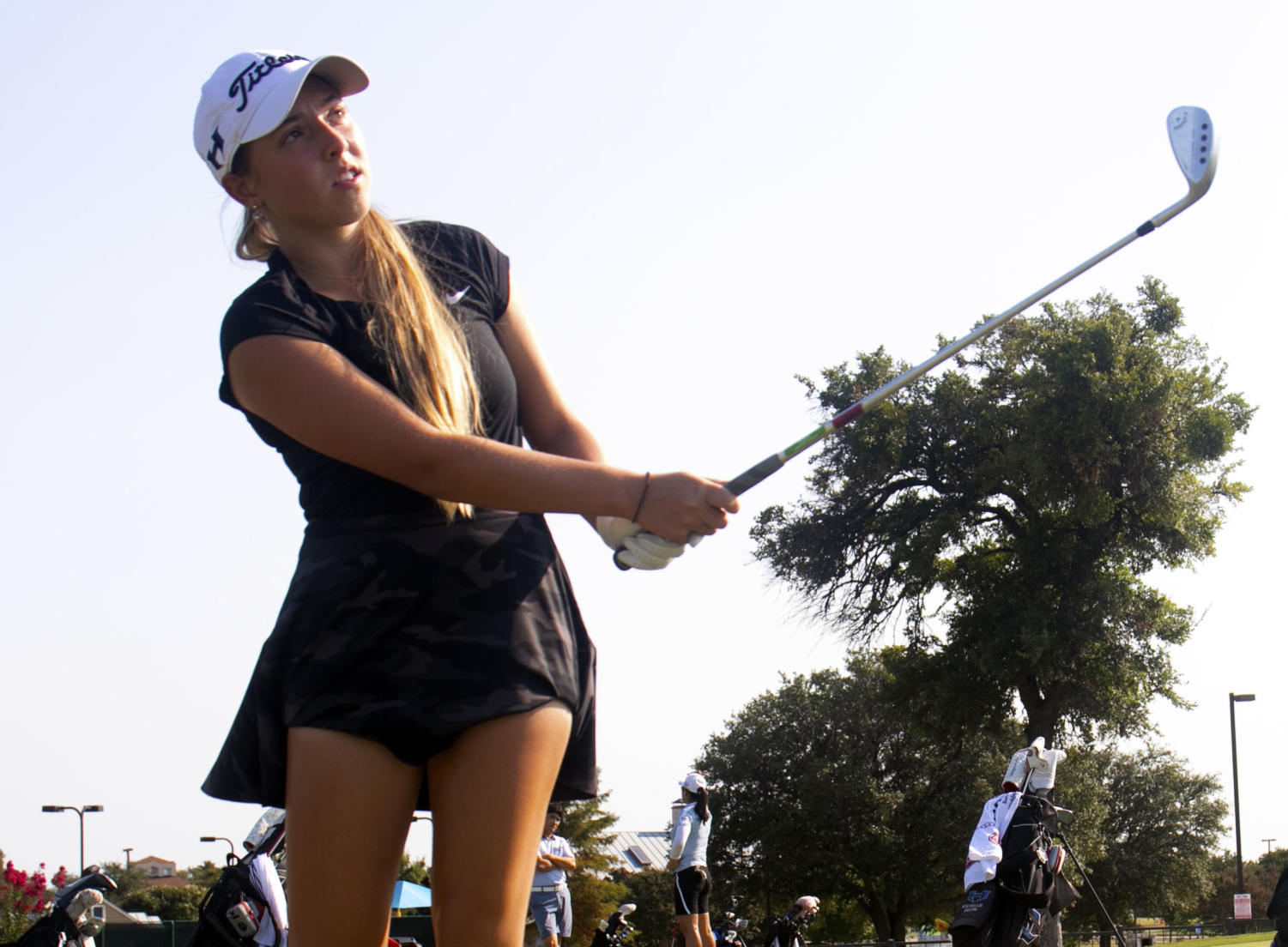 Senior Nina Gudgeon practices for her upcoming golf competition at the Coyote Ridge Golf Club. Gudgeon will play at the Heart of Texas Tournament in Fort Worth on Sept.10. “I would like to make another personal best this year and go to state because it would be a great part of senior year,” Gudgeon said. (Photo by Christy Thomas)

Senior Nina Gudgeon practices for her upcoming golf competition at the Coyote Ridge Golf Club. Gudgeon will play at the Heart of Texas Tournament in Fort Worth on Sept.10. “I would like to make another personal best this year and go to state because it would be a great part of senior year,” Gudgeon said.

Swinging to the future

She started out as a beginner playing with her grandparents. Now, she is a golf commit.

Senior Nina Gudgeon verbally committed to play golf at Palm Beach Atlantic University on Aug.16. She has been playing golf competitively for four and a half years. Though she started late, she found her place among some of the best in the nation.

“Most [of the] top players [on my team] started when they were five or six, so they’ve had much more time to practice and get good at the game,” Gudgeon said. “That’s why they are committed to D1 schools. Even though I started late, I’ve really progressed, and I’m so thankful for getting committed to a D2 school like Palm Beach. When I got to Palm Beach, I realized that I loved the campus, and it’s only a mile from the beach.”

Gudgeon was first introduced to golf through her grandfather, who she considers as an inspiration.

“My grandparents live on the golf course on Bald Head Island off South Carolina, so I have grown up playing golf — just not competitively,” Gudgeon said. “I didn’t get competitive until my eighth grade year. My grandfather inspired me to continue golf, and I consider him as a mentor.”

Last year, Gudgeon was invited to play at Nationals for Hebron Golf. Out of the 27 schools that participated, Hebron placed 7th.

“For nationals, I was able to step in and it was really great,” Gudgeon said. “We were there for a few weeks and it was a good experience [for] team-bonding and having fun. It was one of my favorite memories.”

Despite her golf commit, Gudgeon’s first sport was not golf. It was volleyball.

“I had been playing volleyball for about six or seven years, “ Gudgeon said. “Because I was so short, I really had to build up my upper body strength and get muscle; I [also] kept [being] told that I won’t be on the top team. Golf doesn’t care about height as long as you make a good score, and I have been doing it for my entire life.”

Gudgeon’s teammates have watched her grow on and off the golf course. They are more than happy for her commitment.

“We’ve always talked about college, where we’d want to go and which teams we would want to play for, so seeing her commit to a school she’s been wanting to go to was really exciting,” golf captain Symran Shah said. “Nina always has such a good attitude and knows how to laugh off bad situations on the course. She’s improved so much since freshman year, and I’m so proud of her.”

“I am so proud of her. It has taken her three years to get where she wants to go, and every year, she gets better,” Horrell said. “After we won state, our top girl, Symran Shah, couldn’t play, so Nina stepped up and played top five with us. Nina played with some of the best teams in the country, and she held her own.”

Gudgeon plans to become a doctor while simultaneously fulfilling her golf aspirations.

“I want to major in biology, and they have a great program there,” Gudgeon said. “Everything was just clicking into place. I met the coach in person. He [personally] knows my coach. They work together, so it’s almost like I am continuing on my journey with them.”