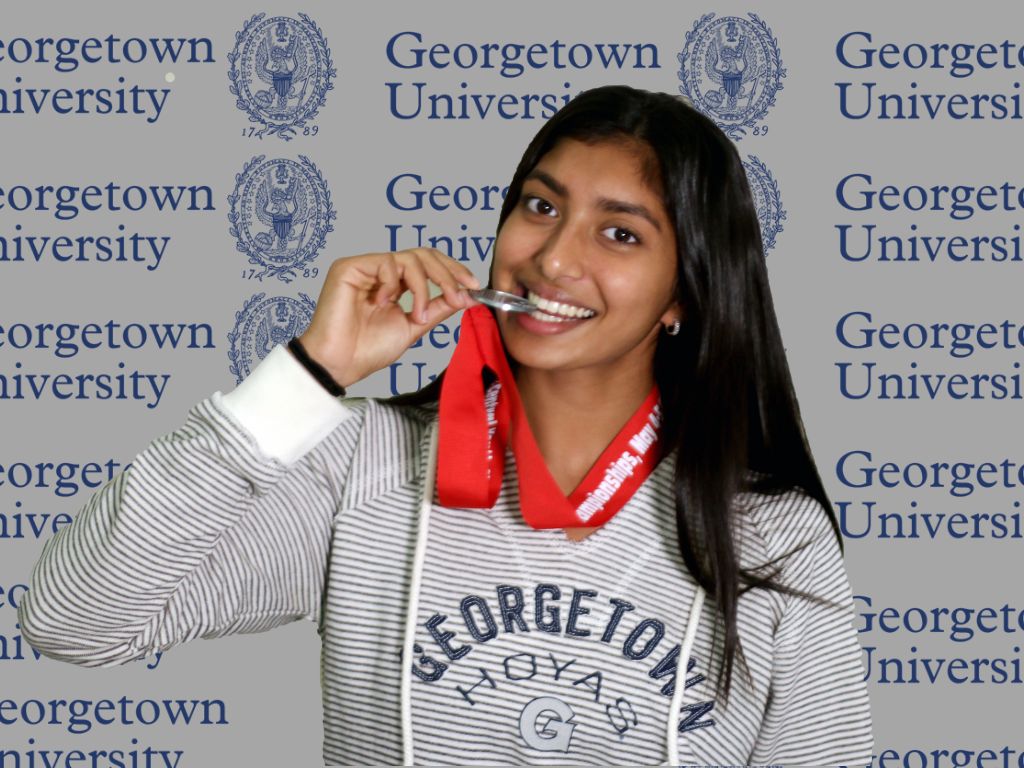 Rowing to the finish line

Senior commits to Georgetown for rowing

As a seventh grader, she had no motivation to play sports. In spite of her mom pushing her to participate, she didn’t like anything. Running out of options, they found rowing. Her first day on the water, she crashed into a tree. Five years later, on Nov. 13, senior Aria Nimmigadda committed to Georgetown University for D1 rowing.

“The biggest [reason] for my [commitment] was the team and the balance,” Nimmigadda said. “Especially after talking to all the girls, [hearing] that they’re able to be a part of the team, do well on the team and be involved in a lot of [activities] outside of rowing [was encouraging]. I don’t want my life to be just rowing and school — I want to be able to explore other interests.”

Nimmigadda started building her skills for the girl’s rowing team at the Dallas Rowing Club. Head coach Lauren Centeno has watched Nimmigadda since she started the team and has noticed that Nimmigadda’s growth in the sport has also benefited her personality.

“She started on the team with her older brother, and usually when you start with an older sibling, [they] dominate the social interactions,” Centeno said. “Over the past [few] years, she has definitely evolved as an athlete, and personality-wise, she has really come into her own.”

According to Centeno, rowing is a sport that not only requires physical strength, but also mental toughness. Centeno believes that Nimmigadda excels in this aspect of rowing by being in a headspace that allows her to keep going and encourage her teammates with that same attitude.

“[Rowing] is a team sport,” Centeno said. ”Unlike basketball or football, this is a team sport where everyone needs to do it over and over again for thousands of strokes. [Nimmigadda has] been really good at working with her teammates in the boat to make sure they’re in the same headspace so that they can work together to get through the race.”

Along with her positivity, Nimmigadda is admired for her humility by both Centeno and one of her teammates, Olivia Park. Even with the amount of success she has earned in the sport, they continue to see her strive for improvement.

“I joined [the team] when [Nimmigadda] was at her peak of rowing,” Park said. “She didn’t [give] up and continued working hard to keep improving even though she was [already] really good. [Even] when she couldn’t come to practice, she would work out [about] three times a day. To keep yourself in that kind of regimen requires so much discipline and self-motivation that will take her so far in college and life.”

Both Nimmigadda’s team and family have been supportive in keeping her motivation for the sport intact. Centeno believes that with Nimmigadda’s drive to improve on whatever she focuses on, she will excel at Georgetown.

“I just enjoy [the sport],” Nimmigadda said. “My coaches and family were a big [part] of that [by] telling me to stick with it. It helps having a good support system, which I’m really lucky [to] have.”