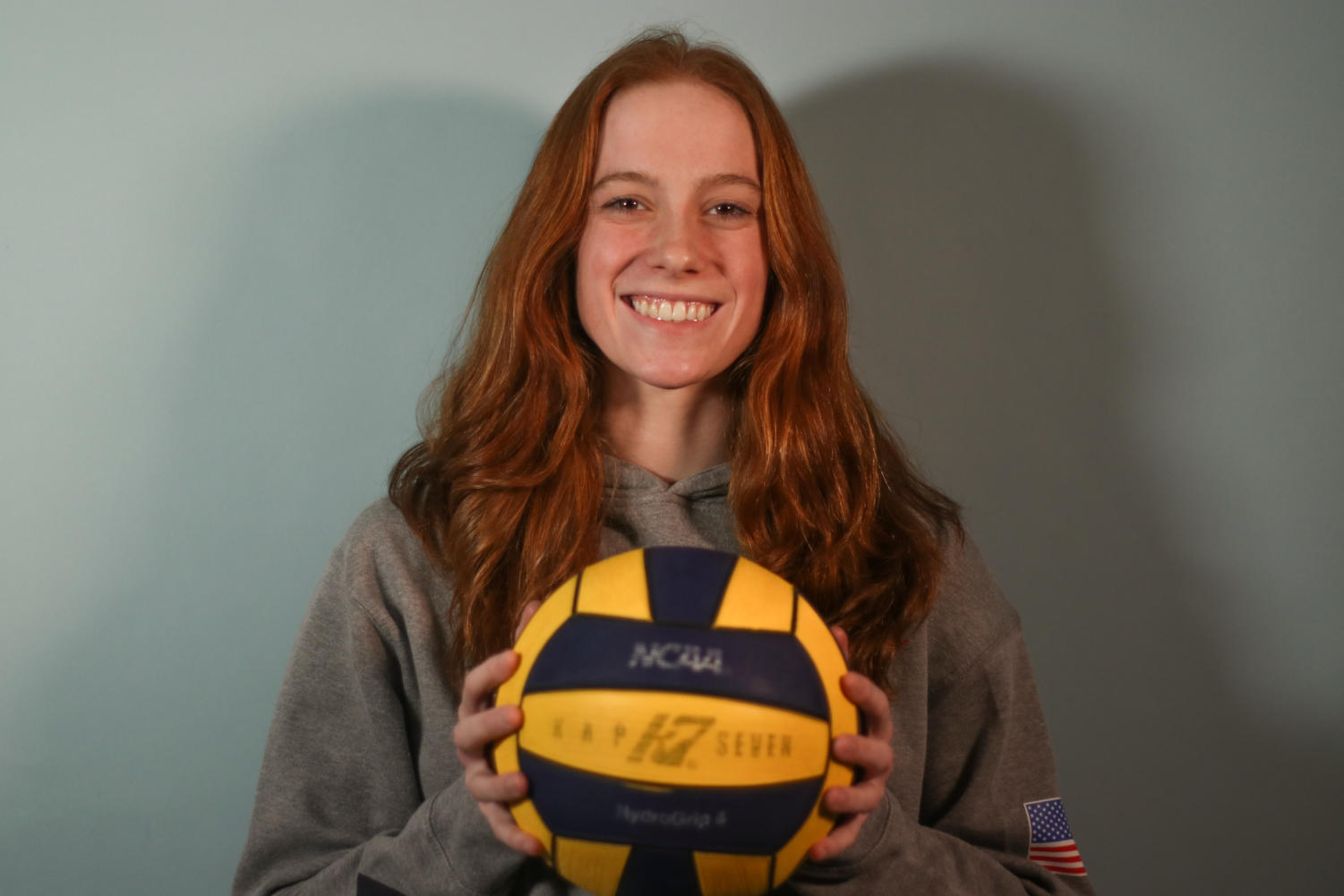 Water polo co-captain Avery Gallucci poses with a signed water polo ball. After high school, Gallucci plans on playing water polo in college and potentially making a career out of her love for the sport. (Madeline Rivera)

Water polo co-captain Avery Gallucci poses with a signed water polo ball. After high school, Gallucci plans on playing water polo in college and potentially making a career out of her love for the sport.

Swimming next to her goalie, junior and water polo co-captain Avery Gallucci stares across the pool toward the goal. She can hear her heartbeat in her ears, adrenaline pumping through her veins. There isn’t time to make an elaborate play. Gallucci swims five meters forward and motions for her goalie to pass her the ball. Staring down Marcus’s goal, Gallucci throws the ball and trusts her gut. Suddenly, the crowd erupts in cheers and screams, their feet stomping loudly against the stands’ floors. For a split second, Gallucci can’t believe it. She made it. She scored a full court shot and won the game. The feeling is indescribable as the crowd cheers for her, her teammates swimming toward her happily.

Gallucci has been playing water polo since her freshman year. A competitive swimmer her whole life, she was intrigued by the idea of playing water polo after her swim captain freshman year, Kaitlyn Hoang, proposed the idea. Since starting in the attacker position two years ago, Gallucci has been recognized as a star player numerous times, including recently being selected for the Texas Interscholastic Swimming Coaches Association (TISCA)’s All-State Second Team on Jan. 3.

“Coaches from all around the state are recognizing [me] and saying out of the whole state, these are the best players,” Gallucci said. “The first state team are the top seven players in the state and the second team is the next best group of seven girls.”

“Avery joined the team as a freshman, [and] I knew she was a club swimmer previously,” Lilly said. “She’s very vocal and positive; she leads [by] example with her hard work. She sets a tone for a good culture [in the team] and doesn’t quit during tough games.”

Due to not all of the girls on the varsity team playing in Mavericks, Gallucci prides herself as a co-captain in helping players on the team grow by giving tips she learned from the club. Once their last season commenced, the team had no seniors playing and decided on having two co-captains – Gallucci and junior Riya Meghani.

“I love helping [players] out,” Gallucci said. “Next year, our coach said that there would only be one captain, and I feel like it would be a huge honor to become captain. I really love making them into a better team and being a leader. They look up to me and I really like that.”

Gallucci and Meghani have been close friends since sixth grade. The two began swimming together in middle school and bonded over their mutual passion of being in the water.

“Avery and I have always grown together,” Meghani said. “We’re both really passionate about [water polo]. Both of us are really good at communicating as well as inspiring everyone on the team together. We know how to make sure everyone’s enthusiastic and ready to win.”

As for next year, Gallucci plans on becoming captain of the girls varsity team for her final high school season, while laying the foundation for her college career as a water polo player after graduation. Playing for Arizona State University’s water polo team would be her dream choice, Gallucci said.

“She’s very passionate, motivated and determined,” Meghani said. “She loves the sport and [is] willing to put in extra time [and] effort. She’s determined to rise up in water polo.”