Head girls’ soccer coach Bobby Vaughn stands in front of the players instructing them while in the weight room. Vaughn became the head coach of the team a little over one year ago.

Head girls’ soccer coach Bobby Vaughn stands in front of the players instructing them while in the weight room. Vaughn became the head coach of the team a little over one year ago.

A year ago, the girls varsity soccer team was without a coach, and someone needed to step up and take the position. Coach Bobby Vaughn took the job, with 20 years of experience coaching football, a completely different field than girls soccer.

After the sudden departure of the team’s head coach, there was a rushed decision to have Vaughn take over. With Vaughn as the new head coach, last year’s girls varsity soccer team went further in the playoffs than the previous year, and his impact the team has helped lead them to a successful start this season. As of Feb. 27, the girls soccer team was ranked No. 11 in the state by Max Preps.

“[Taking the head coaching job] felt like it was the right decision for myself and the team,” Vaughn said. “I really wanted to make the season memorable for all the players and the seniors. I felt like they [would appreciate] someone who cared about the team and their success stepping into the coaching position.”

Vaughn said he expected the first season to be difficult, because the team did not make the playoffs in 2016, even with several Division-1 commits.

“We experienced some bumps in the road that first season,” Vaughn said. “I had to get to know the girls and had to get to know me and my coaching style. We had some key injuries that could have changed the course of the season. After losing Gabby Duca (Alabama commit) the girls were worried and [hopes for playoffs] were gone. We came together, other players stepped up and we made the playoffs.”

Coach Vaughn was the one who stepped into an impossible role and ignited hope and desire into a bunch of lost high school girls.”

Senior and midfielder Brooke Weatherford said the team had mixed emotions at first and a few concerns about having a new coach.

“We were all a little worried about getting a football coach as the new girls varsity head soccer coach,” Weatherford said. “But we also … hoped that he would at least be better than our previous coach. We all held our breaths leading up to meeting our new head coach, hoping for the best, but expecting the worst.”

While the team’s expectations may have started low, Weatherford said Vaughn exceeded hers and many others’ expectations.

“Many believed that after the [departure of our last coach] our soccer program was doomed for failure,” Weatherford said. “Coach Vaughn was the one who stepped into an impossible role and ignited hope and desire into a bunch of lost high school girls. Many believed after the seniors of the previous year had graduated, our program would die.”

Vaughn and the team were able to make it three rounds into the playoffs, better than the previous year.

“After a great season, I knew I wanted to continue to be the head coach,” Vaughn said. “I learned that girls are tough and strong and they listen. I feel like this team is closer group. The seniors are leaders. The seniors are in charge and they took pride in leading the team.”

While Vaughn’s coaching style is different, Weatherford said his style and hope are what brought the team success. 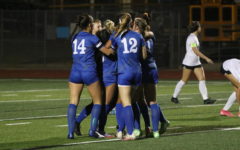 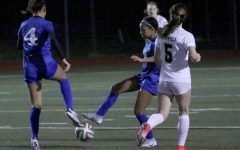 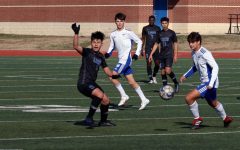 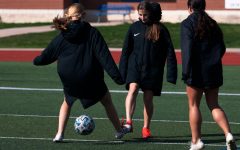 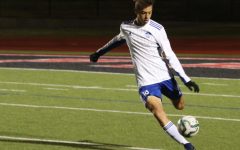