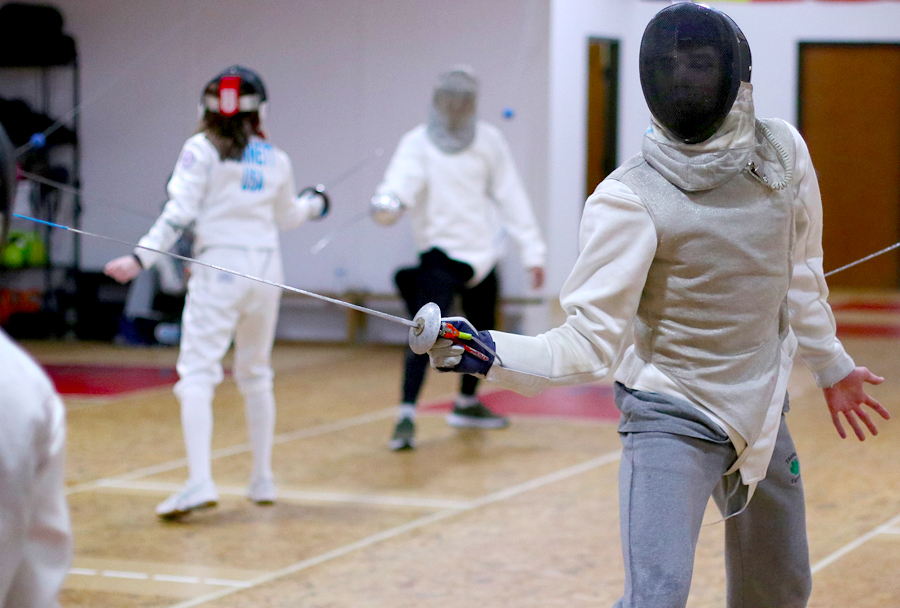 It’s 7 p.m. on a Wednesday, and practice is in full swing. Fencers don their gear: face mask and all. The tell-tale clanging sound of swords touching, envelope the air. Opponents, young and old, and of various skill, face off against each other. Among them, is junior Paul Lewis.

Outside of school, Paul is a competitive fencer. After six years of fencing, he has built his skill and is currently ranked No. 126 nationally in his division. This year, Paul will compete in the Junior Olympic National Championships Feb. 15-18.

Fencing can be done with three type of weapons: epee, saber and foil; each weapon has its own rules. Paul fences with foil, which he said is the most technical.

Paul began fencing recreationally in 6th grade. Back in Ohio, his school offered fencing as an activity, so he decided to try it out.

“When I first started out, I thought it was cool,” Paul said. “[It was] a cool thing to be doing, messing around with swords or whatever. But as I got older and more invested, I saw opportunities in it.”

As Paul continued to fence, he started to compete at local tournaments and saw growth in his fencing ability.

“In Ohio, fencing generally isn’t as strong, so when I moved here I kind of got a taste of bigger waters and I definitely improved a lot,” Paul said.

One of Paul’s coaches, Hossam Mahmoud, said when Paul came to their club, he was already fencing on a national level. Mahmoud said with a little more time, Paul could fence internationally.

“When [Paul] moved here we had very good fencers at national level,” Mahmoud said. “I [had] four or five of them. They left last year and went to college. It was competitive watching them fence each other. He was a match for them on his first day.”

Training with his coaches in Texas helped Paul refine his technique, which is important for fencing foil.

“[My coach] yells at me a lot about going to practice,” Paul said. “Without him, I wouldn’t be anywhere in fencing. When I moved here, my technique was very sloppy and he really refined it.”

He trains nearly every day after school and, since fencing is a year-round sport, attends tournaments multiple times a month. On the side, Paul also referees for foil and epee fencing for local tournaments and colleges.

“Fencing is very volatile to me. Sometimes I hate it, sometimes I love it.”

“Fencing is very volatile to me,” Paul said. “Sometimes I hate it, sometimes I love it. Sometimes when you fence, and you lose to someone you feel like you shouldn’t lose to, it cuts deep because it’s a lot of constant training and hard work. Mistakes are going to happen, but you prefer them not to. I am constantly pushing myself.”

Paul said his parents are supportive of his fencing. His mom, Laura Lewis, volunteers at many of the fencing events and is the office manager for the Fencing Institute of North Texas.

“It’s really helped him as a person,” Laura said. “Coming from a parent’s point of view, it’s helped not just him, but many kids with their character. It builds up character [and] definitely perseverance.”

Paul hopes to attend Penn State or Ohio State through fencing and to get to the top 64 fencers in his division.

“If I can pursue [fencing] in college, I definitely will,” Paul said. “At this point it’s definitely an option because I’m on the points list now. It started as a hobby, but I think now that I’m going somewhere with it I can take it to college.”