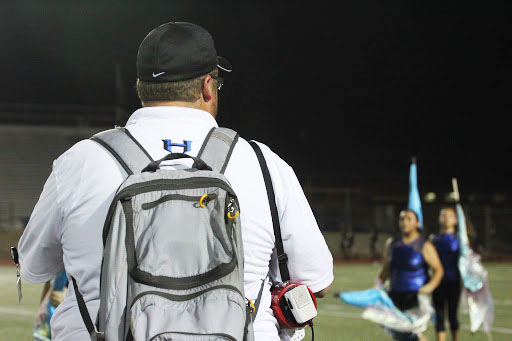 Color guard director Justin Sullivan watches the halftime show as the color guard performs along with marching band. Before every game, the whole group practices their performance as Sullivan gives directions. “They are great students, they work hard and want to get better and learn new things,” Sullivan said. (Sarosh Ismail)

Color guard director Justin Sullivan watches the halftime show as the color guard performs along with marching band. Before every game, the whole group practices their performance as Sullivan gives directions. “They are great students, they work hard and want to get better and learn new things,” Sullivan said.

As the sun sets, painting the sky with bright colors of orange, blue, and yellow, the crowd cheers wildly for the band as they start marching onto the field. Filing in behind them, dressed in navy glitter leotards and holding bright blue flags, the color guard weaves through the band students and take their positions on the field. On the sidelines, their new director, Justin Sullivan, watches them with a sense of pride and anticipation.

Sullivan joined the staff at the beginning of the 2019 – 2020 school year as the new color guard director after their previous instructor, Scott Toosley, unexpectedly left a few days before band camp started this summer. The guards miss Toosley’s friendly personality but are excited to get to know Sullivan as well.

“Our old director was very much a friend and this director jokes around with us, but he’s a lot more serious,” color guard member Trinity Goff said. “He’s got different ways of doing things and his technique is very different than our old director.”

Sullivan has been teaching guard for 14 years in Austin and in Florida. Although the job at Hebron was opened at the last minute, Sullivan applied as soon as he heard of the opening.

“The Hebron band program is one of the absolute best in the nation, and when I heard about the opening, I immediately jumped on the chance to join this incredible team,” Sullivan said. “I had actually planned on taking a break from teaching this year but reconsidered because of the quality of the Hebron program.”

The color guard members concluded good thing when first meeting Sullivan on the first day of band camp. However, they were nervous about the way things would be and how they should act because of the abrupt change in directors.

“The first day we had with him was different and I think a lot of us were scared,” Goff said. “We didn’t know what he was going to be like or how he was going to react to us, but it went really well, I think. We all were open-minded and I didn’t have any problems with him.”

As the year goes on and the marching band prepares for competitions, Sullivan will continue to work hard to train and teach the guard. He has high hopes for them in the upcoming events.

“They are great students; they work hard and want to get better and learn new things,” Sullivan said. “Not all programs are like that, and it is really refreshing to have that in the Hebron guard. They are going to be fantastic this year.”