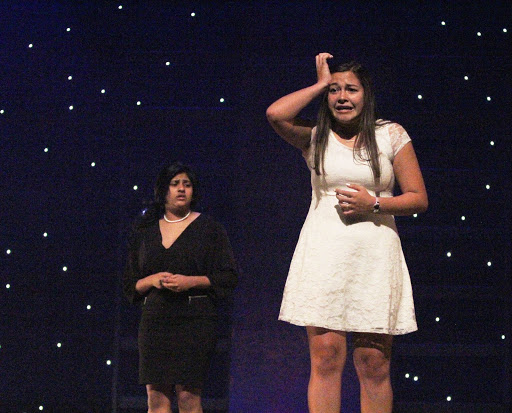 Vitt delivers a monologue on stage as Juliet during dress rehearsal. She was cast to play the main role of Juliet in theater’s fall production. “It’s a different feeling spending months with the same group of people working for the same thing and then you actually get to show it to people,” Vitt said. (Photo by Sarosh Ismail)

Vitt delivers a monologue on stage as Juliet during dress rehearsal. She was cast to play the main role of Juliet in theater’s fall production. “It’s a different feeling spending months with the same group of people working for the same thing and then you actually get to show it to people,” Vitt said.

Dressed in an elaborate costume, the little girl sings and dances around the living room while she sings her favorite song. She dreams of being on stage and doesn’t realize her dreams weren’t so unattainable. Years later, junior Abby Vitt delivers her monologue as Juliet under the spotlight, proclaiming the love and pain she has gone through in life.

Having moved to Hebron this school year, Abby was cast for two female lead roles after auditioning for “Romeo and Juliet” and “The Little Mermaid.” Growing up in a small town didn’t provide her with many opportunities in theater; however, the theater directors were impressed by the natural talent she displayed while auditioning.

“Abby was a complete surprise because we didn’t know what we’re going to get with her,” director Ryan Heitzman said. “She had a really amazing innocence about her.”

Since she was a child, Abby has always been energetic, so it didn’t shock her family when she joined theater. Her mother and sister both sing, so naturally, Abby turned out as another singer as well as the actress of the family. She said both of them are her motivation and that they are always supporting and propelling her forward.

“I always had that feeling that she would [join theater] because of all the silly ways she acted when she was a child,” Abby’s mother, Carrie Vitt said. “She would love to dance and put on these different costumes, so I wasn’t really surprised.”

Despite her childhood activities, Vitt never had the idea of being an actress until she was in middle school and was invited to watch a play.

“I actually didn’t end up going [to the play], but I started thinking theater is kind of cool, and I could get behind that,” Abby said. “And then freshman year on the first day of school, there was a thespian meeting, and I was like, ‘Why not?’ After the meeting, I was like, ‘I love this and I want to do this forever.’”

Moving from Destin, Florida to Carrollton was a big transition, but Abby quickly adapted into the fast-paced lifestyle and found her place in theater. She took advantage of the opportunity she was given and turned what for most is a challenge into an opportunity.

“She went into it with great courage and she was so excited to go to Hebron,” Carrie said. “I’m glad that she got this chance of being out there and doing what she loves.”

The Hawk Theatre Company was just as excited to have Abby in its group as she was to join. She brought charisma that, according to Heitzman, everyone could not help but like about her. She impressed them with not only her talents, but her personality on and off the stage.

“I think that she’s a great student and that we are very blessed and fortunate to have her join our family,” Heitzman said. “All of the thespian team and everybody in the advanced class really likes her, and I think that she’s really fitting in.”

Abby recently performed in her first real show, “Romeo and Juliet,” on Oct. 24, and it only made her more devoted to theater. She said she loved the late nights and when on stage, Abby became someone else as she fell into the role of Juliet and the tragedy of a life she lived.

“I felt like I wasn’t watching Abby, which I guess would be a good thing because you shouldn’t see the person behind the actor,” Carrie said. “I felt so proud of her and I know how much effort she put into this show. The whole crew did a great job because you can’t pull this off without everybody.”

Grateful for the opportunity the move has provided her with, Abby has felt at home with the support of the whole theater community making her transition as smooth as they can.

“I am so grateful for the opportunity and for all the directors for letting me into Hawk Theatre and for also just seeing a Juliet in me,” Abby said. “This was one of my dream roles.”