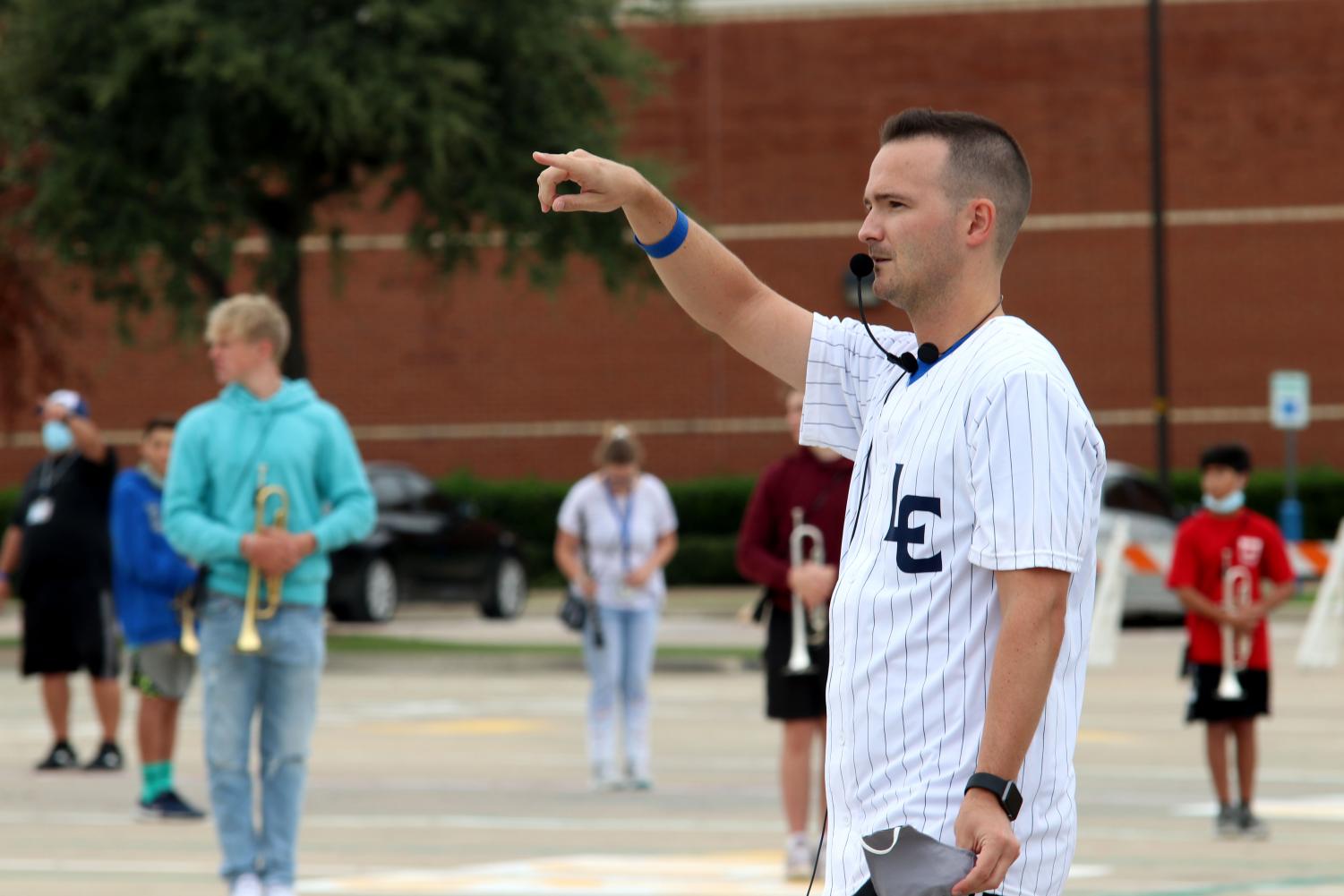 Assistant band director Zack Anderson gives directions to the concert band as they practice marching outside. Anderson is the primary director for Concert I and II and was hired prior to assistant director JP Wilson’s departure. “No one’s got this all figured out, and we’re continuing to figure all of it out as we go,” Anderson said. “I think the one thing that remains the same in all of this, is that we’re all doing it together.”

Assistant band director Zack Anderson gives directions to the concert band as they practice marching outside. Anderson is the primary director for Concert I and II and was hired prior to assistant director JP Wilson’s departure. “No one’s got this all figured out, and we’re continuing to figure all of it out as we go,” Anderson said. “I think the one thing that remains the same in all of this, is that we’re all doing it together.”

After working in the field for six years, assistant band director Zack Anderson is no stranger to the directing world. However, when he was hired in the spring, he was thrown in for an unexpected loop: a pandemic.

Anderson joined the staff as the new assistant band director amidst the COVID-19 pandemic after a previous director, JP Wilson, left to pursue the role of head band director at Rockhill High School in Prosper ISD.

“My experience so far has been a smooth transition from what I had been doing in my previous job to now,” Anderson said. “Even in the virtual sense, I was able to do a lot of behind the scenes work and get integrated into the system before really starting. A lot of my responsibilities and requirements started much sooner than the actual school year, so I was able to get in the swing of things before we kicked off any type of preparation for band camp.”

Prior to his job at Hebron, Anderson was an assistant band director at Liberty High School in Frisco ISD. He has six years of teaching experience and has taught marching, concert and jazz band.

“I think I have had a lot of opportunities to grow as an educator and become well-equipped with tools to prepare me for being a part of an organization with such well-respected history,” Anderson said. “I think having those opportunities has helped me grow, not only as an educator, but as a person in building relationships, culture and continuing the trend of success that Hebron has established.”

In addition to his previous band directing experience, Anderson  worked with Drum Corps International for over 10 years. Drum Corps International, commonly referred to as DCI, is a professional marching band competition; Corps train over the summer and tour the country in hopes to perform at the championships. Many corps rely heavily on technology to aid their learning processes and daily routines, providing Anderson with a strong knowledge of technology and its uses in the marching band world.

“He’s very tech savvy, especially during summer band, and I feel like social distancing hasn’t been a limitation,” junior trumpet player Eloy Treviño said. “My experience with him, and I know that the section’s experience with him and the high brass’s has been really good; he’s handled it very well.”

As a new addition to the staff, Anderson hopes to bring a modernist approach to the program. He plans to achieve this by creating a media team and providing resources for students to excel in the virtual classroom in hopes to continue integrating technology into the program.

“Mr. Anderson has helped us become aware of an updated, long-term approach to our social media presence and how we’re able to transition our program into a digital platform to help kids in this virtual learning environment,” head band director Andy Sealy said. “He has a strong technology background that is helping us make those transformations, and he has a real sense of what a good digital and social media presence for the program can be if we set the infrastructure up right.”

As the season progresses, Anderson has high hopes for the band to perform and put on a show, despite the given circumstances.

“[I’m looking forward to] the day-to-day experience and what it is going to look like at the end of the season when we have our show together, and we can successfully say we were able to do a socially distant marching band show,” Anderson said. “In a time where there is so much uncertainty, I know it’s going to be so rewarding and great to look back at our simple successes in achieving things like putting a show on the field or performing at a game, or when we’re able to actually come together and play as a concert ensemble not socially distant. Really, accomplishing the things that people thought were not possible.”