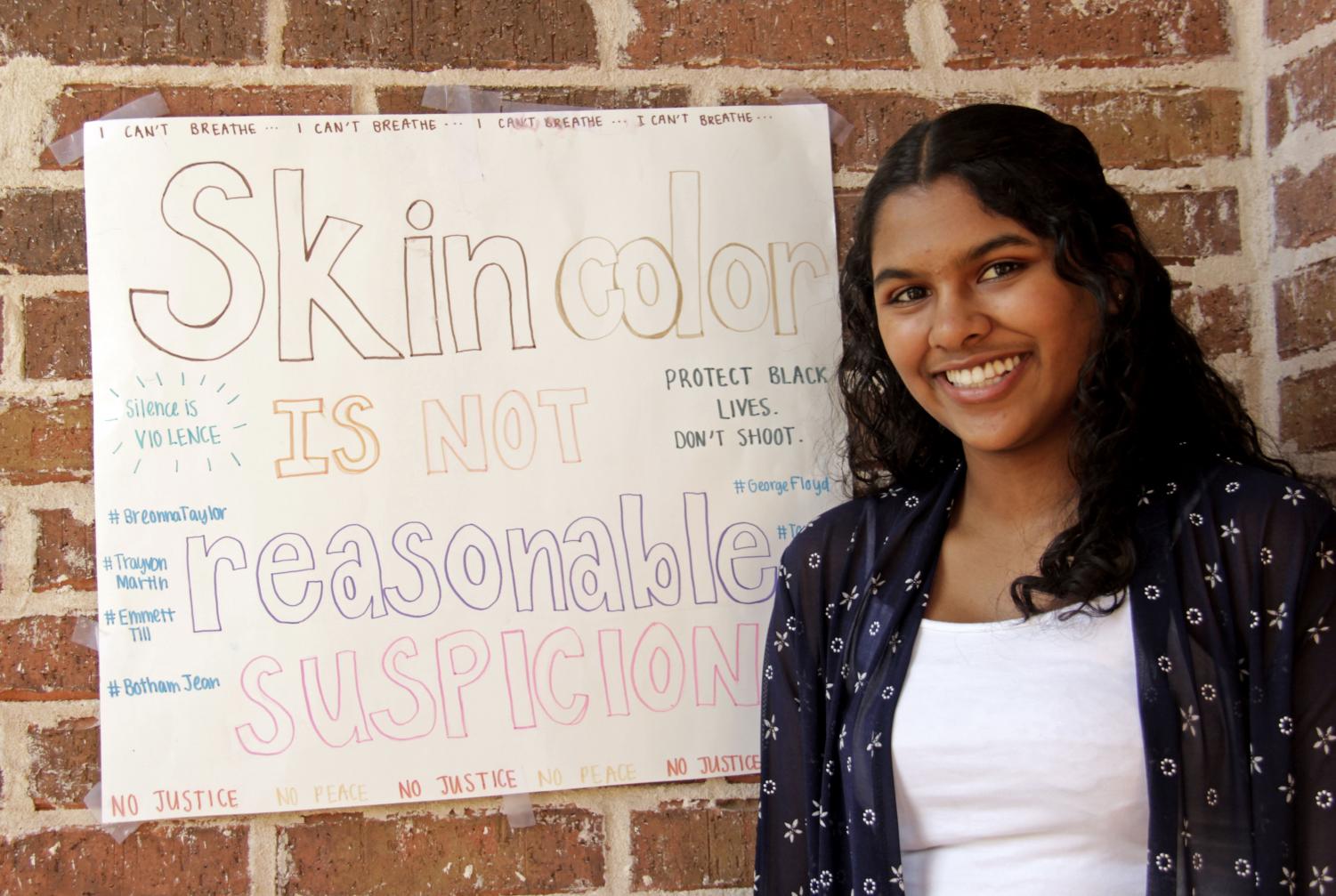 Junior Nandita Kumar poses next to a homemade sign expressing her personal beliefs about the anti-racism movement. Kumar is an adamant supporter of the movement and takes active efforts to fight racial injustice in her community through her position in March For Our Lives (MFOL), a youth-led gun violence prevention organization. (Sarosh Ismail)

Junior Nandita Kumar poses next to a homemade sign expressing her personal beliefs about the anti-racism movement. Kumar is an adamant supporter of the movement and takes active efforts to fight racial injustice in her community through her position in March For Our Lives (MFOL), a youth-led gun violence prevention organization.

Anyone can be an activist

Junior fights for education and equity in community

When she started, she didn’t think she would accomplish anything. Now, she’s meeting with the school district, hosting state-wide workshops and organizing city projects.

Junior Nandita Kumar is a 16-year-old intersectional feminist and activist hoping to educate and inspire people through her own activism efforts.

“I started off with feminism and the gender equality movements because I see sexism around me so often,” Kumar said. “I witnessed a lot of sexism in the South Asian community. I saw it in movies and in real life, and I was just really tired of being in a world that doesn’t see everyone as equal.”

Junior Megan Ramos, a member of Hebron Girl Up, March For Our Lives Greater Dallas and LISD S.E.E., knows Kumar through social media and connected with her through shared political views.

“She’s someone who’s very proactive in her community,” Ramos said. “She reminds me that I can constantly work towards a more inclusive community and that I can always be doing something. She inspires me to do more.”

Kumar’s role in March For Our Lives Texas as the Diversity and Inclusion Co-Captain has allowed her to work closely with the MFOL Texas Data Captain and Greater Dallas chapter lead James Thompson. After getting to know Kumar through their shared activism efforts, Thompson said Kumar is incredibly passionate and engaging with everything she does and that he is proud of what she’s been able to accomplish.

“She’s always ready to learn new things about different perspectives,” Thompson said. “I think Nandita generally strives for equity among her peers and making sure that people have what they need to feel safe.”

Kumar started Hebron Girl Up as one of her first activism efforts, using intersectionality theory to focus on how race and gender overlap to give advantages or disadvantages in society.

“There’s no such thing as a single issue,” Kumar said. “We focus on the intersection of gender and race because there’s a huge disparity in hyper marginalized identities like black trans women or queer POC women.”

Kumar has Hebron Girl Up choose a theme every semester to focus their advocacy efforts on. For this semester, the club has chosen menstrual and reproductive health, starting with a project to end period poverty, which is the inadequate access to menstrual hygiene tools.

“For our first project, we’ve partnered with another organization, Chhaupadi, that’s working to end period poverty in Nepal and in DFW,” Kumar said. “We’re reaching out to local businesses and doctor offices and asking if we can put a little box where people can donate menstrual hygiene products.”

Kumar said she believes most people would be able to help if they were given accessible options, which is why she started this project.

“People aren’t even aware that a lot of people who menstruate can’t purchase the products they need to maintain their cycle with dignity and respect,” Kumar said. “This project is about bringing our community together and eliminating the stigma by placing [menstrual hygiene products] in an accessible and viewable place for everyone.”

Through her involvement with Hebron Girl Up, March For Our Lives and LISD S.E.E., Kumar uses all of her positions to prioritize education as the first step toward making a difference.

Kumar’s actions have inspired Ramos and Thompson to fight for change and improve their communities.

“She’s always thinking about how we can make everything more inclusive and equitable,” Thompson said. “What Nandita does that inspires me is that she’s always willing to have a conversation and build an action from that conversation.”

Kumar said she wants to make the current social movements less intimidating so more people feel comfortable getting involved, regardless of commitment levels or political affiliations.

“Everyone has the power to make a change and to work towards a more equal future, so regardless of who you are and what time you think it takes, you’re going to be able to make a change,” Kumar said. “I think many people just underestimate the power that they have. Anyone can be an activist. All you have to do is get involved.”